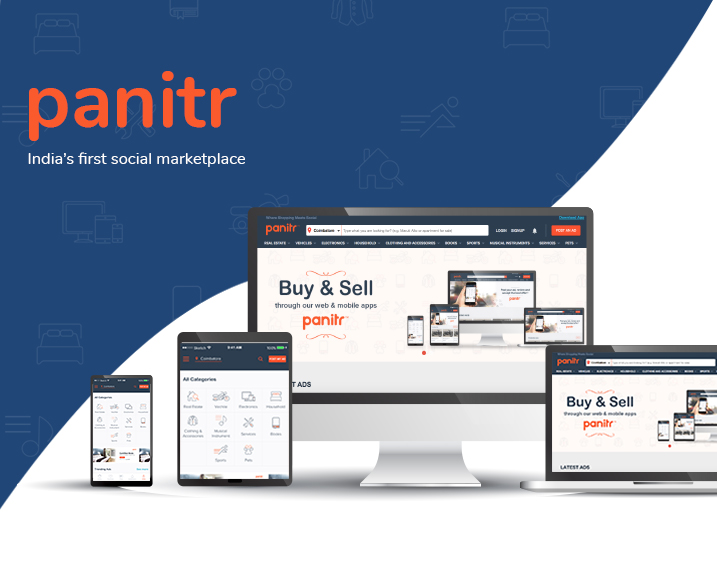 Panitr is an online social market platform for buying and selling products via posting e-ads and bidding directly to the seller without a middleman monitoring.
This app is a product of our in-house product development team, transforming the idea to real time live production app, that is being used by 100+ customers posting ads everyday.

As panitr is a product of our on premises team, the main concern was to provide an easy post an add feature with powerful search engine that retrieves 1000+ ads based on different combinations of categories and filters.
With fierce competitors in the market, making the app standout was the key concern so the dev team was posed with challenging feature implementation like voice searching, elastic search integration. In build chat engine to make bid faster and seamless.

The Architecture team configured ec2 and integrated CI/CD along with the configuration for testing domains as well.

The backend architecture was made robust backed up powerful MongoDB replicaset implementation and Node.JS clustering to eliminate/minimize the downtime of the app in the time of deployment.Elasticsearch implementation led to low latency complex query response returns for complex filter combinations that can be done by the users. Redis provides a way to cache the results to further minimize the search results return time. In Addition to the conventional login/signup process, Panitr also provides one step social login process, providing easy onboarding for users.
Initially the frontend app was developed in AngularJS but was later converted into Angular 6 to harness the power of SSR to improve the SEO of the app. The app had revamped design to make the user flow seamless for posting and buying ads
With the surge in usage of the app in web, Panitr was decided to be moved to the mobile app market as well. As we needed the app to be agile, development of the app as a hybrid one was the optimal solution. The development team chose Ionic, powerful combination of Angular counterpart making the app development faster. The complex challenge of retaining the workflow of the web app in mobile for easy post of an ad was also accomplished.

Panitr being the first in-house product of squashapps had seen an optimal ROI with 1000+ customers posting ads and bidding to vendors seamlessly and with surge in new user onboarding and existing user retainment in web and mobile apps.