A Guide to Desktop Application Development in 2022

Home Developer Tips A Guide to Desktop Application Development in 2022

Before web apps became a thing, people used desktop applications. It seems like web-based solutions have gradually pushed them out; however, there has recently been a comeback in the popularity of desktop application development. Trello, Azure, and Wrike are the brightest examples of web-based apps that have begun to expand into desktops. In 2022, web applications and mobile apps are dominating the market. As a result, businesses and individuals won’t rely on desktop computers as heavily as they do today because we’ll all be using our phones to access most things. However, there are still people developing desktop applications for various reasons.  This guide will show you how to develop your desktop application in 2022. You can use this guide if –

What is the desktop application?

Desktop apps are software programs that interact with the operating system instead of web-based or mobile apps. They can be any program so long as they run on a desktop computer and provide a user interface for input and output.  Desktop applications are usually used in one place but might have a “system tray” icon that remains visible on the screen. The term is also used to define an app that runs only on the desktop rather than being available through a browser or other means.    Some desktop applications like word processing and media players allow you to perform different tasks, while others, such as gaming apps, are developed for entertainment.  Some examples of desktop apps are:

What is desktop application development?

Desktop application development is a process where developers build applications that can be used on desktops and laptops. These apps are usually built for Windows, macOS, Linux, or other desktop operating systems. The list of software categories includes personal productivity software (e.g., word processors), media creation and editing (e.g., video editors), and entertainment (e.g., games).  Desktop applications don’t require any internet connection to run, and users have to download and install them on their computers. The desktop applications can be developed in different languages, including C/C++, Java, Python, Ruby on Rails (ROR), PHP, Perl, etc., typically using libraries like Qt or GTK+.

Why should you develop a desktop app instead of mobile apps? 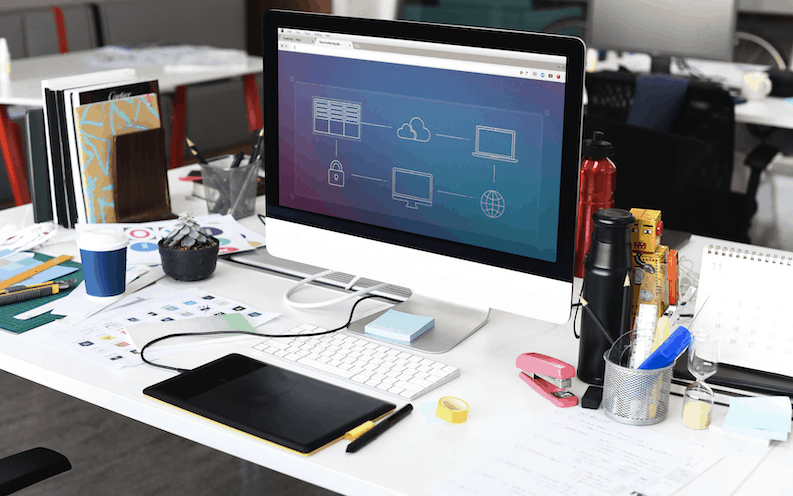 As a desktop developer, determining the best framework to use is never a walk in the park. Aside from just analyzing the features of a particular framework, you are required to acknowledge the advantages and disadvantages that come with using a specific framework.

Windows Presentation Foundation or WPF is a framework within the .NET framework mainly used to develop the graphics of a desktop application. You will implement it to build the user interface for software. WPF has succeeded in winning the hearts of numerous programmers since it was first introduced to .NET back in 2006. This is because the runtime libraries of the WPF are usually set in the Windows operating system. A key component of WPF is its ability to unite different user interface components. These components include vector graphics, adaptive documents, pre-rendered media objects, and rendering 2D and 3D.

Electron is a cross-platform development framework that GitHub developed. This framework uses Node.js, and this is an excellent choice for developers looking to build desktop applications that work on the macOS, Windows, and Linux operating systems.  Many large companies are using this platform to develop their apps, including Facebook Stack, Microsoft. Web Developers also can build software with Electron because they do not need particular knowledge or experiences from other specific platforms.  The ability for web developers to utilize an existing JavaScript codebase while adding additional functionalities will play a significant role in developing productivity when producing products.

There is an exciting framework that made the .NET platform famous for desktop application development. It’s called UWP, and it allows developers to create cross-platform applications. Universal Windows Platform (UWP) will enable developers to build apps that can run on many different Microsoft-owned platforms.  This implies that your software will be able to run on multiple devices. This is made possible by a specialized algorithm for Windows application development.

WinForms is a class library that has been present in the .NET desktop framework since its very inception. Initially, it would replace the Microsoft Foundation Class Library (MFC) but now acts as an event-driven tier platform.  A desktop application created in .NET using WinForms is governed by events—meaning all visual elements come from overlying control classes and are waiting on user input before functioning further.

Cocoa software is a native framework for native macOS development. It is an object-oriented framework for creating a user interface for macOS, iOS, and tvOS. It not just adds the functionality of the UI but also makes the interface more engaging. But to develop apps through the Cocoa framework, developers will be required to use development tools provided by Apple.  These include Xcode and other programming languages used in Windows desktop development, including Python, Ruby, and Perl. There is also the AppleScript programming language. These different languages will require bridges to enable Cocoa to use them, like PyObjC, RubyCocoa, and PasCocoa. There are a variety of development frameworks available for desktop apps. It depends on the operating system you want to use and what kind of app it will be. 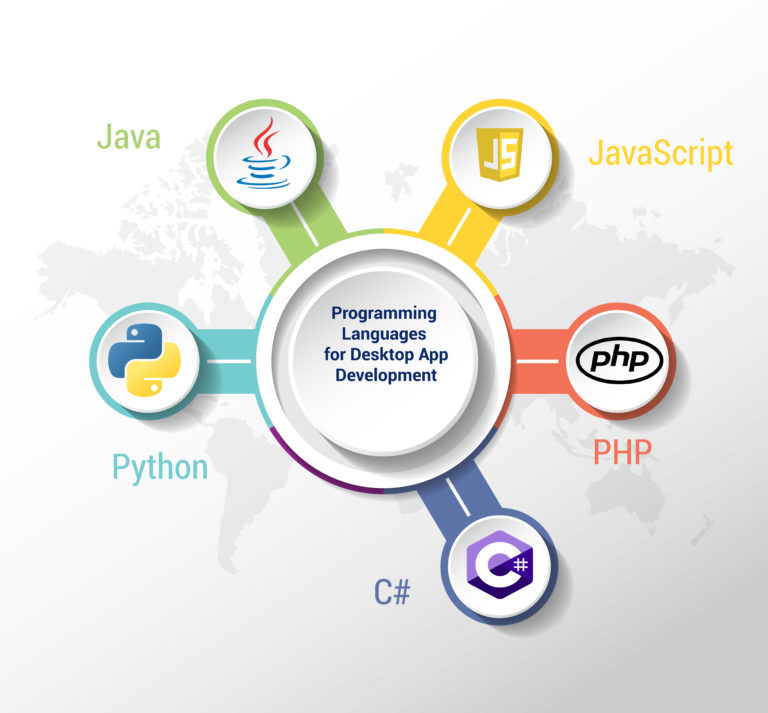 If you are looking to build a desktop application, here is the list of the best programming languages for it in 2022. Read on to know about some of the most popular languages that can be used to develop software applications for desktops.

C# is an advanced, type-safe, and object-oriented programming language designed and developed by Microsoft Corporation.  Although holding its origins in the C family, it will be close to the JAVA and JavaScript programmers. As Microsoft builds C# and Windows developers can efficiently design a windows-based desktop app. In addition, C# allows developers to create various types of robust and secure apps that work on the .NET ecosystem.

C++ is a general-purpose, procedural programming language that has the power to manage system resources. It can be used for desktop applications and more like browsers or games. A programmer can use IDEs to edit the source code of C/C++ programs; some examples are Eclipse, NetBeans, Qt Creator, Visual Studio (VS), XCode, etc.

Python has become one of the most widespread programming languages in recent years. It’s applied in everything from machine learning to building websites and software testing. Moreover, python is a general-purpose language, which means it’s created to be used in a range of apps, including data science, software and web development, automation, and generally getting stuff done.

Java is a high-level programming language primarily used to develop computer applications. Its syntax is similar to C and C++ because it was designed to be “a better C.” Java has many features helpful in developing software, including object-orientation, modularity, strong typing for variables and constants, exception handling for error management, threads for concurrent programming.  A recent version of Java includes lambda expressions which make coding simpler.

JavaScript is a programming language that was designed to make web-page authoring easier. It’s used in many popular web browsers, and it provides the interactive features you see on most websites.  JavaScript can be used to do things like show message boxes, validate input fields, modify page content, create dropdown menus and perform calculations with everything from simple mathematical expressions to complex trigonometric functions.

PHP is a general-purpose programming language that can be used to create dynamic content and databases. Moreover, PHP is significantly robust to be the core of the most comprehensive blogging system (WordPress), deep to run a vast social media network (Facebook), and simple enough for beginners to learn. It has become the best choice for developers who want to build desktop applications. Nevertheless, to build cross-platform desktop applications with PHP, you can either use Nighttrain, PHP Desktop, WXPHP, or TideSDK.

Apple-designed comprehensive Swift programming language in 2014. It is a general-purpose, multi-paradigm, compiled language that’s designed for safety and readability. The goal of the Swift team is to create an environment where programmers can write code with fewer errors than are possible with other languages.  Swift has been used successfully to build many iOS apps, including Siri, Keynote, Pages, Numbers, and many more. One of its most powerful features is Playgrounds which lets developers run their code without compiling it first!

Red is a powerful, reactive, and functional programming language designed to overcome the hindrances of REBOL(Relative Expression Based Object Language).  Having a native-code compiler, Red gives a broader field for developers. Using Red for Windows and macOS desktop applications development in 2022, developers get features like support for a prototype-based object, cross-compilation, cross-platform native GUI, and visual studio plugins for different necessary components.

Go is an open-source programming language that Google developed. It’s fast, simple, and compiled. It has also been used to build software like Docker and Kubernetes. But what makes Go so great?  Go is a type of programming language known as “systems programming,” It can be used to create low-level programs for web servers or operating systems or other things not associated with typical desktop applications. This makes it supreme for developers who desire to focus on performance rather than bothering about their app’s user interface all the time.  Go provides very nice features such as built-in concurrency (so multiple tasks can run simultaneously) and garbage collection. 10. Object Pascal Object Pascal is an addition to the Pascal programming language that supports object-oriented programming features such as methods and classes. It is compiled into swift, type-safe, and native code. Not just that, but object pascal can be used to develop apps for Linux, Windows, and macOS simultaneously.  Two significant implementations that are available for object Pascal include Delphi and Free Pascal.  Some of the notable frameworks you will require while developing desktop apps employing Object Pascal are Lazarus, Oxygene, and Firemonkey. Desktop application development is a type of software programming that creates computer programs to be run on the desktop. The most common use case for these applications is business-oriented and provides certain functionality such as word processing, spreadsheets, or project management tools. At Squash Apps, we offer all kinds of services related to developing apps, including web design and marketing support if needed. For more information, visit our official website: https://squashapps.com/.

Parvin Khatun is a writer who works in Squash Apps is dedicated to providing high-quality content that can help clients get more visibility on the search engine results pages. She works hard to boost her clients’ online presence through her content writing services- she has experience in SEO content writing, she writes about website articles, technical articles, and many others. Parvin Khatun is a writer who works in Squash Apps is dedicated to providing high-quality content that can help clients get more visibility on the search engine results pages. She works hard to boost her clients' online presence through her content writing services- she has experience in SEO content writing, she writes about website articles, technical articles, and many others.